Please note: One dose lasts 4 hours. Do not give >5 doses in 24 hours. The concentration of Infant Tylenol is being changed by the manufacturer. During the transition period, be sure to check the concentration for accurate dosing instructions. 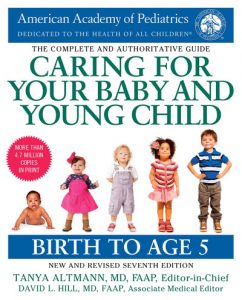 Caring for Your Baby and Young Child
(American Academy of Pediatrics)

Drawing on the contributions and practical wisdom of more than 100 pediatric specialists, the thoroughly revised 5th edition includes: 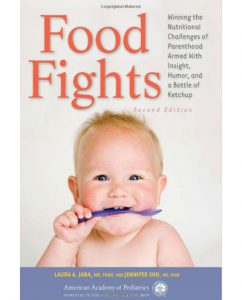 Food Fights provides parents with practical, reality-based strategies for dealing with common behavioral and developmental issues that can make getting kids to eat healthy foods a daily challenge. Readers are sure to relish the 10 palatable peacekeeping strategies served up by Drs Jana and Shu, who bring together the science of nutrition with the practical insight of parents who have “been there.” Topics include:

It’s entertaining, real-world advice every parent can use every day! 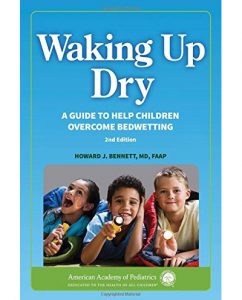 This comprehensive and authoritative self-help guide on bedwetting is written for parents, caregivers, and children (ages six to thirteen). Parents and children can address the challenge of bedwetting together with this delightful book that guides them through Dr. Bennett’s Waking Up Dry Program. Includes instruction on behavior management techniques, calendars, contracts, and bedwetting alarms as well as practical tips and easy-to-follow activities. 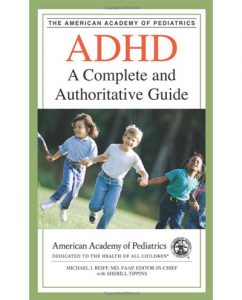 ADHD: A Complete and Authoritative Guide (American Academy of Pediatrics)

Based on the American Academy of Pediatrics clinical guidelines for ADHD and written in clear, easy-to-understand language, this essential guide offers accurate, up-to-date findings on evaluation and diagnosis, coexisting conditions, and unproven treatments. It explores ADHD management strategies that balance the roles of behavior therapy, medications, and parenting techniques. Also addressed are behaviors associated with the teenage years and what schools can do to support children with the condition.

In ADHD: A Complete and Authoritative Guide, you’ll find answers to questions such as: 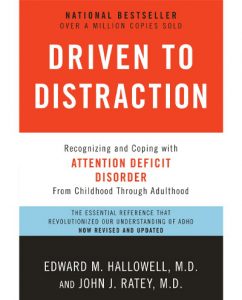 Through vivid stories of the experiences of their patients (both adults and children), Drs. Hallowell and Ratey show the varied forms ADD takes — from the hyperactive search for high stimulation to the floating inattention of daydreaming — and the transforming impact of precise diagnosis and treatment. 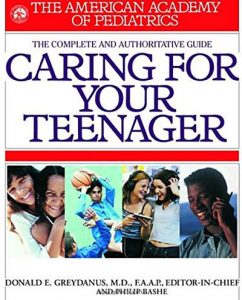 Caring for Your Teenager: The Complete and
Authoritative Guide (American Academy of Pediatrics)

Now in one comprehensive AAP volume, parents can access accurate, up-to-date scientific information to promote and support positive physical, emotional, cognitive, and psychologic growth in their teenagers. Spanning the full spectrum of adolescent development issues, this easy-to-use handbook helps parents and their children navigate the “tumultuous teens” with practical advice from a trusted authority-an essential “survival” guide to meet the challenge of raising a happy, healthy teenager.

Covers a wide range of teen health and development issues including 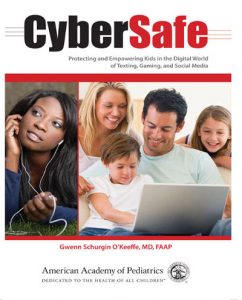 Children today are growing up in a world far different from the one in which their parents were raised. Between the Internet, gaming systems, mp3 players, and cell phones, today’s kids are nearly always connected to something digital. And, because it’s developing so fast, it’s hard for parents to stay on top of the technology—and even harder to figure out how to help their kids make good decisions when it comes to these things.

This informative book will guide parents through the landscape of the digital world, helping them better understand things like:

Beyond informing readers on the latest trends in technology, Dr. Gwenn gives provides the tools parents need to help their child navigate the digital world with insight and intelligence. Because, let’s face it, just because kids may be more technologically savvy than their parents doesn’t mean they have the wisdom and understanding to make good decisions with the media they’re using. In addition to helping parents understand the digital world so they can help their children thrive in it, the book also includes tips to help the whole family discover the joy of the unplugged world that is still going on around them. 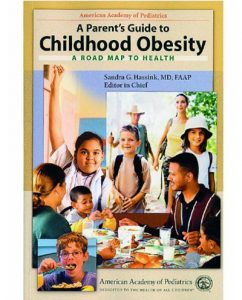 A Parent’s Guide to Childhood Obesity: A Road Map to Health (American Academy of Pediatrics)

Are you worried about your child’s extra weight? If so, you’re not alone. Childhood obesity has reached epidemic levels in the United States, affecting more than 9 million children and teens.

Being overweight can limit your child’s physical activity and contribute to low self-esteem, but what’s even more disturbing are the serious medical conditions and diseases that can develop as a result of being too heavy—like cardiovascular disease and type 2 diabetes.

How do you as a parent take steps to help your child lose weight? Like it or not, childhood obesity is not a problem that can be solved overnight. Even so, the message of this book is simple—you and your child can succeed.

A Parent’s Guide to Childhood Obesity: A Road Map to Health offers long-term strategies and expert advice along with worksheets, questionnaires, and other interactive tools to help your child reach and maintain a healthy weight. 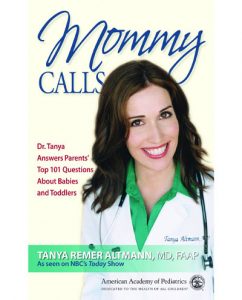 Inspired by the questions pediatricians are most often asked, this guide provides on-the-spot, concise advice for those who are unsure about how to handle their child’s condition. Offering the insight of a parent of children under the age of three and the experience of a pediatrician, this resource provides information on a diverse range of topics, including How can I be sure that my newborn is getting enough to eat? Should I worry that my child has a fever after getting his shots today? What should I do if I think my child swallowed a coin? and I don’t know what vaccine information to trust—should I vaccinate my son? in a reassuring yet humorous tone. 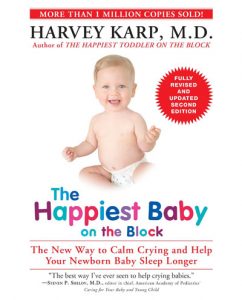 The Happiest Baby on the Block: The New Way to Calm Crying and Help Your Newborn Baby Sleep Longer
(Harvey Karp, MD)

Karp, a pediatrician in Santa Monica, Calif., and assistant professor at the School of Medicine, UCLA, offers a new method to calm and soothe crying infants. While nursing or being held satisfies some babies, others seemingly cry for hours for no reason. These babies suffer from what Karp calls the Fourth Trimester. When you bring your soft, dimpled newborn home from the hospital, you may think your nursery is a peaceful sanctuary…. To him, it’s a disorienting world part Las Vegas casino, part dark closet! Karp recommends a series of five steps designed to imitate the uterus. These steps include swaddling, side/stomach position, shhh sounds, swinging and sucking. The book includes detailed advice on the proper way to swaddle a child, the difference between a gentle rocking versus shaking and more. According to the author, virtually all babies will respond to these strategies although some trial and error may be needed to find the most effective calming method. A number of the steps letting kids nurse more frequently or encouraging babies to use pacifiers, for instance, contradict other childcare experts. However, parents who are at their wits’ ends because of a baby’s incessant crying will find this book invaluable. In fact, expectant parents may want to read it before they bring their newborns home from the hospital. 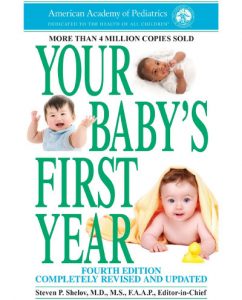 Comprehensive, reassuring, and up-to-date, Your Baby’s First Year is an indispensable guide for all parents who want to provide the very best care for their baby. 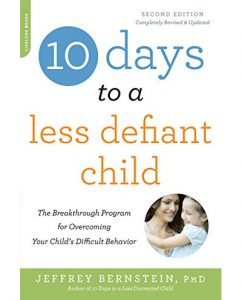 Occasional clashes between parents and children are not uncommon, but when defiant behavior — such as tantrums, resistance to chores, and negativity — becomes chronic, it can cause big problems within the family. In 10 Days to a Less Defiant Child, child and family psychologist Dr. Jeff Bernstein has developed a ground-breaking 10-day program to help parents gain back control over their defiant child or teen. This powerful and exceptionally reader-friendly guide explains what causes defiance in kids, why it’s so destructive to the family, and shows parents step-by-step how they can end the behavior. 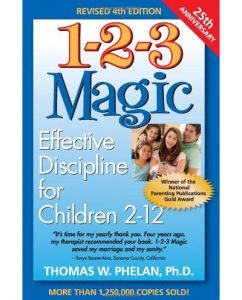 This revised edition of the award-winning 1-2-3 Magic program addresses the difficult task of child discipline with humor, keen insight, and proven experience. The technique offers a foolproof method of disciplining children ages two through 12 without arguing, yelling, or spanking. By means of three easy-to-follow steps, parents learn to manage troublesome behavior, encourage good behavior, and strengthen the parent-child relationship—avoiding the “Talk-Persuade-Argue-Yell-Hit” syndrome which frustrates so many parents. Ten strategies for building a child’s self-esteem and the six types of testing and manipulation a parent can expect from the child are discussed, as well as tips on how to prevent homework arguments, make mealtimes more enjoyable, conduct effective family meetings, and encourage children to start doing their household chores. New advice about kids and technology and new illustrations bring this essential parenting companion completely up-to-date. 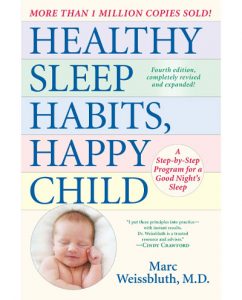 One of the country’s leading researchers and pediatricians reveals a revolutionary new approach to your child’s sleep in this complete guiding to solving — and preventing — sleep problems. Includes a step-by-step program for establishing good sleep habits and individualized guidelines from infancy throughout the growing years. 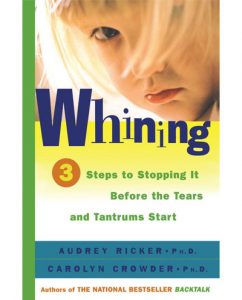 Whining: 3 Steps to Stop It Before
the Tears and Tantrums Start
(Audrey Ricker, PhD and Carolyn Crowder, PhD)

Are you ready to end the whining wars in your house?

It starts with a whimper, an insistent demand, or a certain tone of voice that every parent recognizes with dread — your child is starting to whine, and if you don’t respond properly you’ll have a full-blown tantrum or argument on your hands. Kids of all ages know that whining works when they want that extra hour of TV, the unplanned toy purchase, or a later curfew. But stopping such behavior without giving in to a child’s demands isn’t easy, and if left unchecked, whining can lead to constant disruptions at home, in school, or anywhere else your child chooses. Now the same authors who solved a common parenting problem in the national bestseller Backtalk present three proven methods for putting an end to whining, as well as information on:

Filled with numerous real-life examples, encouraging advice, and simple steps you can start using immediately, this invaluable guide will help you end the cycle of giving in to whining only to have your child do it again, and instead replaces misbehavior with effective, meaningful, and loving parent-child communication.